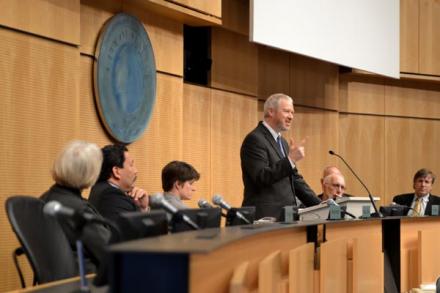 Enlarge image
‘I know every one of the city council members sitting to my left and right believe as I do: it’s time for this state to legalize marijuana,’ Seattle Mayor Mike McGinn said in his State of the City address.
City of Seattle

In his “State of the City” address, Seattle Mayor Mike McGinn made an impassioned plea today for the legalization of marijuana saying in the illegal trade in drugs was fueling crime in the city.

“It is time we were honest about the problems we face with the drug trade. Drugs are a source of criminal profit, and that has led to shootings and even murders. Just like we learned in the 1920s with the prohibition of alcohol, prohibition of marijuana is fueling violent activity,” the mayor said in the written version of his speech.

He added that the war on drugs “fuels a biased incarceration policy. The drug war’s victims are predominantly young men of color.”