COLORADO SPRINGS — When it hit the streets here last week, the latest issue of ReLeaf, a pullout supplement to The Colorado Springs Independent devoted to medical marijuana, landed with a satisfying thud. 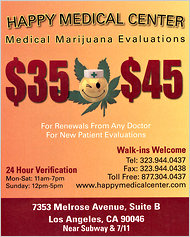 Ads like this one have bulked up newspapers in big markets.

Forty-eight pages in all, it was stuffed with advertisements for businesses with names like Mile High Mike’s, Happy Buddah and the Healthy Connections (which enticed potential customers with promises of “naughty nurses” to tend to patients’ needs).
A full-page ad in ReLeaf costs about $1,100, making the publication a cash cow for The Independent, which has used its bounty from medical marijuana ads this year to hire one new reporter and promote three staff members to full time.
The paper has also added a column called CannaBiz that follows news from across the country; its author is the new marijuana beat writer.
What would happen in the many communities now allowing medical marijuana had been a subject of much hand-wringing. But few predicted this: that it would be a boon for local newspapers looking for ways to cope with the effects of the recession and the flight of advertising — especially classified listings — to Web sites like Craigslist.
But in states like Colorado, California and Montana where use of the drug for health purposes is legal, newspapers — particularly alternative weeklies — have rushed to woo marijuana providers. Many of these enterprises are flush with cash and eager to get the word out about their fledgling businesses.
“Medical marijuana has been a revenue blessing over and above what we anticipated,” said John Weiss, the founder and publisher of The Independent, a free weekly. “This wasn’t in our marketing plan a year ago, and now it is about 10 percent of our paper’s revenue.”
It is hard to measure what share of the overall market they account for, but ads for medical marijuana providers and the businesses that have sprouted up to service them — tax lawyers, real estate agents, security specialists — have bulked up papers in large metropolitan news markets like Los Angeles, San Francisco and Denver.
“This is certainly one of the fastest growing industries we’ve ever seen come in,” said Scott Tobias, president and chief operating officer of Village Voice Media, which publishes alternative weeklies across the country.
Alternative weeklies are not the only publications raking in medical marijuana lucre. Dailies like The Denver Post and The Bozeman Daily Chronicle in Montana are taking advantage of the boom and making no apologies.
“My point of view is, for the moment at least, it’s legal,” said Stephanie Pressly, publisher of The Daily Chronicle, adding that the paper generates about $7,500 a month in advertising from medical marijuana businesses. “The joke around here is that it’s a budding business.”
Newspaper publishers saw an opening for medical marijuana advertising after the Obama administration said last fall that it would not prosecute users and suppliers of the drug as long as they complied with state laws. Though many states have made legal allowances for medical marijuana for nearly a decade (the total now is 14 and the District of Columbia), that decision freed more people to market and sell it as a medical product.
Advertising demand for the drug grew so quickly in Village Voice Media’s Western markets that the company started publishing supplements late last year. It gave them cheeky names like “Chronic-le” in Denver and “The Rolling Paper” in San Francisco, Los Angeles and Orange County. The tag line in Denver displayed underneath a smiling, sauntering, sandal-wearing cartoon joint reads, “Your Guide to Medical Marijuana. Enjoy.”
In Colorado, where people have likened the explosion of medical marijuana to the state’s 19th-century gold rush, the market for ads and information about the drug has been especially strong. The summer 2010 issue of The Chronic-le, at 48 shiny pages, included features like “Toke of the Town,” a summary of the latest marijuana-related news, and a roster of the nearly 250 stores in the Denver area that sell marijuana.
Mr. Tobias said that in Denver money from advertising for marijuana-related businesses has totaled 15 percent of the weekly Westword’s revenue this year and nearly 40 percent of its classified advertising revenue. A small, eighth-page display ad on one of the paper’s glossy inside pages can cost $550.