By Steven Kurutz
Britta Riley grew up on a ranch in Texas, so after four years of living in a one-bedroom apartment overlooking an airshaft, in Williamsburg, Brooklyn, she felt deprived of nature. She decided to try growing food indoors, and three years ago began reading about hydroponic systems. “I got to visit some hydroponic growers and nerd out with them, and figured out how to reverse-engineer it for the personal scale,” said Ms. Riley, 34. Britta Riley helped develop the Windowfarm, a hydroponic system for indoor use that delivers liquid nutrients to plant roots. 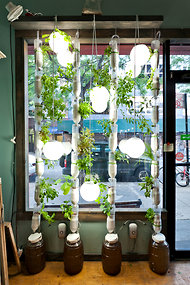 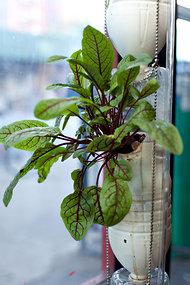 Along with a partner, Rebecca Bray, she developed the Windowfarm, a Rube Goldberg-esque contraption with plastic water bottles, hoses and an air pump that can be hung in an apartment window to grow herbs and vegetables. Like other hydroponic systems, it delivers liquid nutrients directly to the roots of the plants. Ms. Riley, a Web developer, also built a site where she posted instructions and invited people to refine the design, a decentralized process she refers to as “R&D.I.Y.”
More than 20,000 people now belong to the Windowfarm online community, and Ms. Riley and her new business partners (Ms. Bray has since left) are building a 14-foot-tall Windowfarm for the 21C Museum Hotel in Louisville, Ky., which will harvest the crops for its restaurant. She recently spoke to a reporter at her storefront office in Williamsburg, where a Windowfarm with chives, spinach and Romaine lettuce faces the street.
How does the system work, in layman’s terms?
The air pump makes a bubble, and on top of the bubble, a little bit of water is captured that contains the liquid nutrient solution. As the bubble rises to the top of the column of bottles, the solution then trickles down through the plants’ root systems and is recaptured at the bottom. So each one is its own liquid loop.
Aren’t marijuana growers into the same kind of hydroponics?
The difference between us and pot growers is all of the stuff designed for pot growers is way expensive.
Why?
Companies are capitalizing on the idea that these guys really want to have dank bud. Also, pot growers don’t want anyone to see what they’re doing, so they’re usually growing in these dark rooms. We’re growing this stuff in our windows.