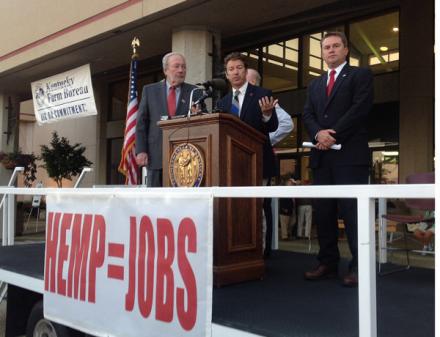 Credit Jack Brammer / Lexington Herald Leader
Kentucky Sen. Rand Paul voiced his support Thursday for legalizing industrial hemp. He backs Agriculture Commissioner James Comer efforts.
Agriculture Commissioner James Comer says he is restarting the long-dormant Kentucky Industrial Hemp Commission. The General Assembly created the commission ten years ago to look into hemp’s potential in the commonwealth, but it has never met. This morning, Comer announced that he is reforming the commission and, per state law, he will be the chairman.
“Kentucky has the perfect soil and climate to be the nation’s top producer of industrial hemp. Studies have shown that hemp could be at least the 3rd most profitable crop in Kentucky and our farmers could capture the lion’s share of the industry,” he says.