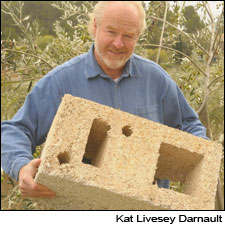 At Château Maris, Robert Eden decided to build the new winery out of lightweight hemp brick.

When he started planning a new winery for Château Maris in southern France’s Languedoc region, Robert Eden looked at natural options such as stone, rammed earth and even straw. What he ended up choosing was something that, at least in certain crowds, elicits quips about marijuana—hemp. But it’s no joke: The new Maris winery is built almost entirely from large, sturdy “bricks” of organic hemp straw. Those bricks not only reduced carbon emissions from construction, they also continue to capture carbon dioxide from their surroundings.
“This is the first winery in the world like this,” claimed Eden of the 9,000-square-foot building, finished just in time for the 2012 harvest after eight years of work, five of them devoted to planning and research. “We’re in unknown waters here.”