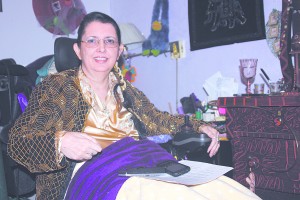 Ray was diagnosed with multiple sclerosis, a debilitating disease that, along with pharmaceutical poisoning due to the number of medications she was prescribed, caused a rapid decline in Ray’s health.
Within just a few years of her diagnosis, Ray was in a wheelchair, and her health had deteriorated to the point that she couldn’t speak or even open her eyes.
“I was entombed in my body and in terrible pain, like a fire,” Ray said. “As far as everybody knew, I was sleeping, but I was awake and alert.”
Ray said that a friend came over one day and somehow knew that she was awake. He told her that he was going to put something to her lips and that she needed to inhale.
She did as instructed, and the result was immediate, Ray said.
“My eyes snapped open and I yelled! I hadn’t been able to speak for the last month and now I yelled, ‘What was that,’” Ray said.
When he told her that it was a marijuana cigarette, Ray said that she had never experienced anything so instantaneously beneficial.
“I knew, right then, that I’d be able to live my life again,” Ray said.