Dan Roberts in Washington and Karen McVeigh in New York 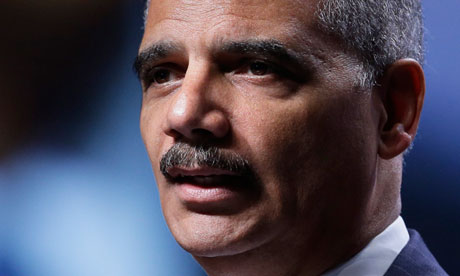 Holder said mandatory minimum sentences “breed disrespect for the system … they do not serve public safety. Photograph: Matt Rourke/AP
The US government took the first tentative steps toward tackling its 1.5m-strong prison population on Monday by announcing that minor drug dealers would be spared the mandatory minimum sentences that have previously locked up many for a decade or more.
Reversing years of toughening political rhetoric in Washington, attorney general Eric Holder declared that levels of incarceration at federal, state and local levels had become both “ineffective and unsustainable.”
The Department of Justice will now instruct prosecutors to side-step federal sentencing rules by not recording the amount of drugs found on non-violent dealers not associated with larger gangs or cartels.
“Our system is in many ways broken,” Holder told the American Bar Association in San Francisco. “As the so-called war on drugs enters its fifth decade we need to ask whether it has been fully effective and usher in a new approach.”
“Too many Americans go to too many prisons for far too long and for no truly good law enforcement reason,” he said, adding later: “We cannot simply prosecute or incarcerate our way to becoming a safer country.”