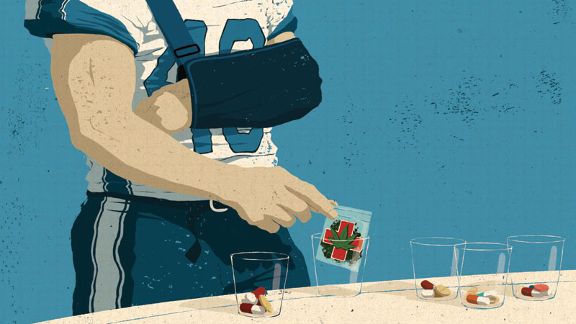 Mark Smith for ESPN
States are legalizing it. More and more Americans approve of it. Is the NFL next?

This story appears in ESPN The Magazine’s Dec. 23 Interview Issue. Subscribe today!
THE TRUEST WAY to see the NFL is not before the game, when the helmets are shiny and the energy is high, but after the final whistle, when the bodies are bruised and the athletic tape is soiled with dirt and blood. Or at the practice facility the following day, when the players show up with crutches and walking casts, fingers in splints, arms in slings.
Pain is the singular constant of the NFL. Maintenance of that pain is as vital to players as mastering the read-option; whether through cortisone, painkillers or drugs and alcohol, they have always self-medicated to heal from the game that breaks their bodies. Which is why, more than any other sport, the NFL should lead the conversation on considering medicinal marijuana as a therapeutic alternative.