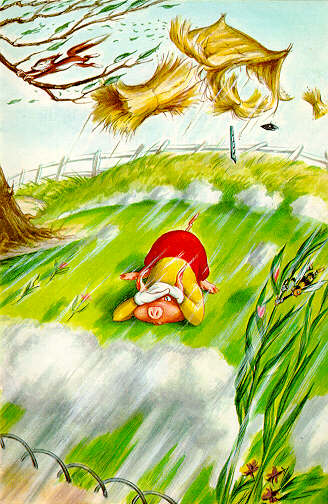 In a perfect storm for prohibition, the “house of straw” — the credibility of anti-marijuana lies — is the first to fall. Image from uni-paderborn.de.

Part 1: House of Straw
America’s long-running and expensive “War on Drugs,” despite claims that it protects citizens from the harms of dangerously addictive drugs, has been most aggressively focused on cannabis (marijuana, hemp; Cannabis sativa).
Cannabis is not physically addictive and has been consumed by humans for thousands of years without any documented deaths from its use alone. To even begin to catalog the harms of prohibition itself would take a book and cannot be undertaken seriously until the war is over.

Cannabis is one of the most variable members of the plant kingdom, capable of expressing many attributes depending on genetics and nurture. Strains of cannabis (hemp) that provided fiber for sails and rope during the American Revolution did not have any psychoactive effects. Until the mid-1930s, cannabis was grown in the U.S. as hemp, primarily for its valuable fiber, but also for its edible, energy-rich seed oil.
Other strains (marijuana, ganja, reefer, etc.), long known in Asia and Africa and imported to the West by Queen Victoria of England’s physician, among others, do have such effects and are valued as medicine and as social lubricants less volatile than alcohol.