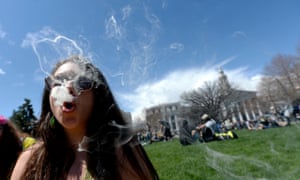 A campaign is under way to ask Denver voters about allowing marijuana consumption in bars and other places that only allow people over 21.
Activists who campaigned for recreational pot legalisation in Colorado have launched a petition drive to allow what they call “limited social marijuana consumption” at bars. The activists need about 5,000 signatures to get the question on November ballots.
It would allow bars or clubs to allow marijuana use as long as patrons bring their own weed and comply with clean-air laws. That means the pot they consume would have to be edible, or if smoked, consumed on an outside patio, matching the way cigarette smoking is regulated now. Outdoor smoking sites would have to be shielded from public view.