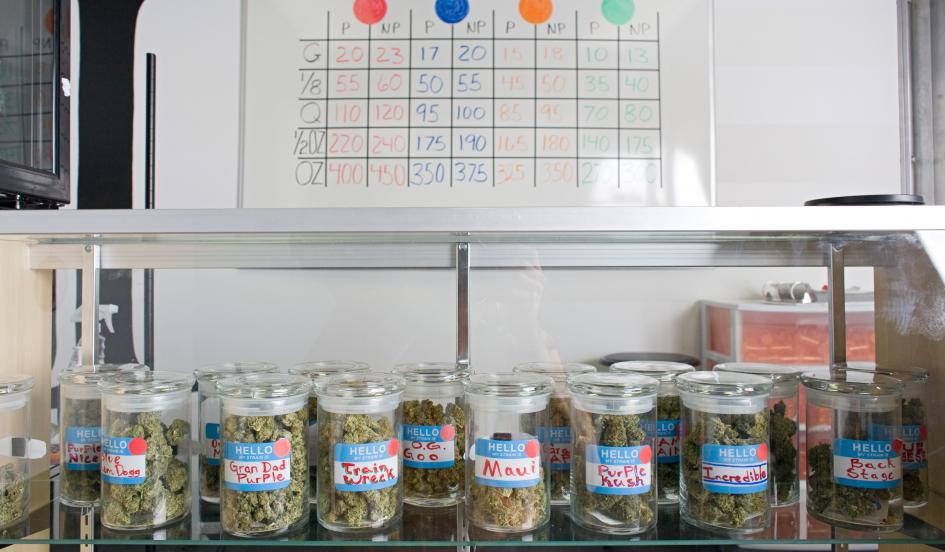 Canisters of medical marijuana and a price list for the marijuana products is seen inside Highland Health medical dispensary and wellness center in Denver, Colorado, U.S., on Wednesday, Nov. 4, 2009. A growing number of cancer patients and oncologists view marijuana as a viable alternative for managing the negative effects, such as nausea, bone pain, anxiety, and depression, of both chemotherapy and cancer itself. MATTHEW STAVER/BLOOMBERG/GETTY

After a successful surgery to remove a cancer-ridden section of Jeff Moroso’s large intestine in the spring of 2013, the oncologist sat down with his patient to prepare him for what would come next: 12 rounds of punishing chemotherapy, once every two weeks for six months—standard practice for the treatment of colon cancer.
Moroso’s oncologist spent most of that appointment writing prescriptions for medications he said would minimize the debilitating side effects of chemotherapy. He gave Moroso scripts for ondansetron (Zofran) and prochlorperazine (Compazine) for nausea, and lorazepam (Ativan) for anxiety and insomnia. Because the nausea drugs are known to cause gastrointestinal problems and headaches, he also recommended three over-the-counter medications for constipation and one for diarrhea, as well as ibuprofen for pain. In total, he instructed Moroso to take more than a dozen prescription and nonprescription drugs and supplements.
Moroso says the first three rounds of treatment were more awful than he could have ever imagined. After chemotherapy, he felt so ill and weak that he could barely stand up, and it took him days to rebound. And the prescription drugs just made him feel worse. “I felt real sick, incapable of doing anything except for lying there and trying to hang on,” says Moroso, who is 70 and now cancer-free.
Moroso couldn’t afford to lose days of work while he was doing his chemo. He’d heard from friends and read in the paper that cannabis can help a patient through chemotherapy, so he got a letter from his oncologist that allowed him to obtain medical marijuana. (He chose coffee beans infused with 5 milligrams of cannabis, a low dose that he took when he felt he had to.) By the seventh round of chemotherapy, Moroso had dumped his prescription pills. “I would get blasted on the stuff and be happy as a clam, no problems,” he says.