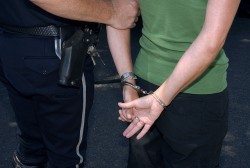 A marijuana user is being arrested every minute–more than a dozen will be taken to jail as I type this piece. This according to the Federal Bureau of Investigation which today released its annual Uniform Crime Reportaggregating law enforcement data and tallying the nation’s crimes and arrests in 2014. While murders, robberies, and burglaries dropped considerably, authorities across the country still apparently have an uncontrollable urge to arrest and prosecute nonviolent drug offenders.