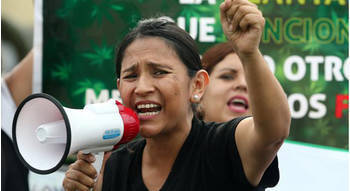 Most of us are aware of the growing support for cannabis across the United States and Canada, but the movement is far from confined to North America. Medical and recreationally legal marijuana has also been taking root in South America, from full-scale legalization in Uruguay to decriminalization in Chile.
Now, thanks to a group of caring mothers, medical marijuana may soon find a home in the mountainous and generally conservative country of Peru. Public support has blossomed after a police raid on a makeshift marijuana lab run by women looking to ease the symptoms of their sick children.
Unexpectedly, the “drug bust” ended up amplifying the women’s plight on national television, creating a massive boom in public support. The backlash towards the police raid has pressured President Pedro Pablo Kuczynski to set aside outdated drug restriction laws and propose medical cannabis legislation.