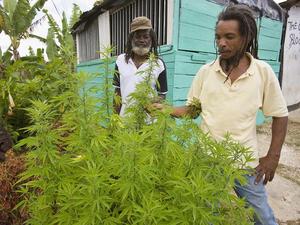 Despite the war on drugs being lost long ago, the debate on a progressive drug policy in the Caribbean is showing positive signs of revival due to increased campaigning on behalf of community organizations, farmers, and academics. Earlier this month, Caribbean Community (CARICOM) leaders met in St. Lucia to discuss regional issues in the usual fashion but were joined outside by a small but vocal demonstration campaigning for the decriminalization of marijuana.
Andre DeCaires, Chair of the Cannabis Movement of St. Lucia, and leader of the St. Lucia Green Party, stated that the demonstration’s purpose was not confrontation but to spark dialogue within St. Lucia and throughout the region. DeCaires commented on how Central and South America are already making important progress in thinking of alternatives to the status quo policies and that “We just want a conversation; we don’t want anybody to change anything now. We’re not expecting any change, but we want dialogue on the issue.”
The Cannabis Movement is certainly doing its best to make sure that happens. Despite being only a little more than a year old, the organization has already hosted information booths at public events and educational exhibits in the Castries Town Hall, where they discussed the benefits of the Cannabis “herb” as a medicinal as well as an industrial crop. The organization’s public relations officer Gordon Rae added that “On the advice of the Royal Saint Lucia Police Force, the Movement has added a prevention component so that the public is made aware that our intention is not the promotion of the use of marijuana but the decriminalization of the plant in all its beneficial forms”.