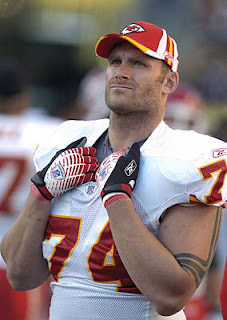 Kyle Turley spent eight years as an offensive tackle in the NFL, which means he spent eight years standing in the way of oncoming traffic. The gig led to two diagnosed concussions and, Turley says, a estimated 100 that went undiagnosed during his tenure on the turf.
Now that he’s retired, Turley is feeling the full force of those had injuries. And after years of trying to treat the symptoms with pharmaceuticals, he’s discovered the one drug that works better than anything else: marijuana. On Thursday, Turley appeared on ESPN’s “Highly Questionable” and described the difference smoking has made in his life.